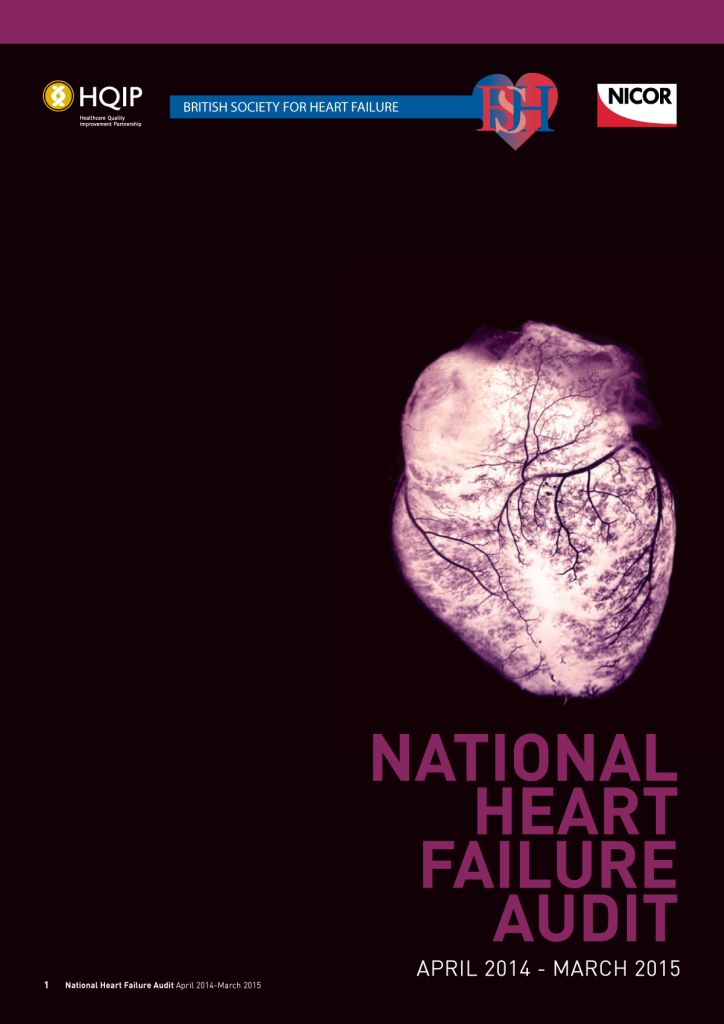 “The National Heart Failure Audit Report of 2014/15 continues to draw our attention to the high mortality rates for hospitalized heart failure patients. It also highlights potential solutions. Patients with heart failure have a lower mortality during and after the admission if they are cared for by cardiologists and have access to the specialist multi-professional heart failure team.” – Sarah Clarke Consultant Cardiologist, Papworth Hospital. President of the British Cardiovascular Society.

This year’s Heart Failure (HF) audit is based on 56,915 admissions to hospitals in England and Wales between April 2014 and March 2015. This represents 73% of HF admissions as the patient’s primary diagnosis in England and 81% in Wales.

• During hospital admission, more than 91% of patients get an echocardiogram, a key diagnostic test. However, rates are higher for those admitted to Cardiology (96%) rather than General Medical (88%) wards. Specialist input, irrespective of the place of admission is associated with higher rates (95%) of echocardiography.

• The prescription of key disease-modifying medicines for patients with heart failure and a reduced left ventricular ejection fraction (HF-REF) has increased, including betablockers (86%) and mineralocorticoid antagonists (52%); treatments that are both life-saving and inexpensive.

• Prescription rates for all three key disease modifying medications for patients with HF-REF has increased from 35% to 50% for those admitted to Cardiology wards over the last five years.

• Irrespective of the place of admission, 45% of patients with HF-REF seen by a member of the specialist HF team as an inpatient, were prescribed all three disease modifying drugs, a key performance indicator (KPI) albeit with considerable room for further improvement.

• The number of patients seen by HF specialists has increased to 80% this year. In particular HF nurses saw more HF patients admitted onto general medical wards (24%) than last year (18%). This is important as specialist care improves mortality.

• The mortality of patients hospitalised with heart failure remains high overall at 9.6%, although lower than in the past few years. However, large variations in mortality amongst hospitals exist. • Mortality rates in hospital are better for those admitted to Cardiology wards.

• Post discharge mortality rates at one year and out to 6 years are independently associated with admission to a cardiology ward, cardiology follow up and the use of key disease-modifying medicines for HF-REF.

• Had the patients identified within this audit cycle as having HF-REF, who left hospital on none of the three disease modifying drugs, been prescribed all three, then an additional 169 patients would likely have been alive at the time of censor. With more comprehensive prescription and dose optimisation across the audit there is the ability to prevent numerous additional deaths.