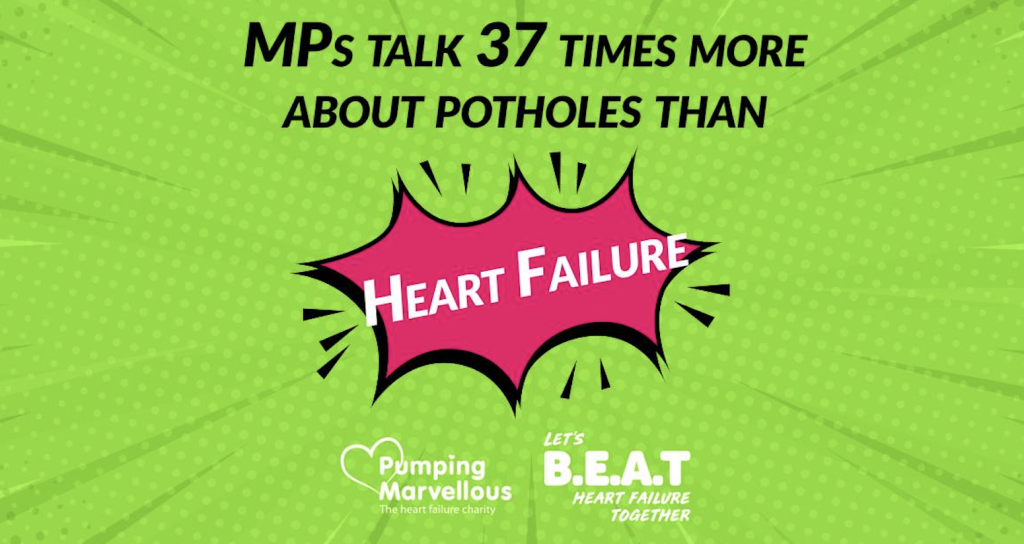 MPs talked about potholes in our roads 37 times more often than they did about a serious heart disease that affects a million Brits, new research has revealed.

The new peer-reviewed study, being published in the open access journal, Open Heart, published by BMJ, looked at how often heart failure was discussed in parliament. It found that the condition – the only cardiac condition increasing in prevalence in the UK – by 200,000 new cases every year – struggled for mentions by MPs when compared to the ‘trivial’ issue of bumps in the road.

“No wonder so many people are unaware of the symptoms and treatments for heart failure, if even our MPs would rather talk about an issue that leads to punctured tyres, than one that turns people lives upside down” said Nick Hartshorne-Evans, the Chief Executive and Founder of Pumping Marvellous, the UK’s only heart failure charity.

And it turns out that the researchers only looked at the mentions of potholes after a tongue-in-cheek suggestion. He went on to say: “We have long suspected that HF doesn’t get the attention it deserves based on how common and serious it is, but to be overshadowed by such a trivial issue as potholes was sad. When we jokingly wondered if it would be less common than potholes, we were genuinely shocked at the results. We need to raise awareness of this serious – but treatable – condition.”

The study also found that heart failure is talked about disproportionately less than other illnesses such as cancer and dementia, both in parliament and in common discourse such as news and even fiction.

Co-author of the report and Cardiologist Dr Rajiv Sankaranarayanan added:

“Almost 1 million people in the UK are living with heart failure, yet our policy makers, the people who drive the health agenda in this country would rather discuss minor bumps in the road. It’s little wonder I see so many patients who are completely unaware of what heart failure is, when it gets so little attention.”

Heart failure is serious cardiac condition, but if diagnosed quickly it can be well managed. Pumping Marvellous are trying to raise awareness of the symptoms of heart failure, to improve diagnosis.

The research was undertaken as part of a project examining the way in which heart failure is discussed in the UK. Academics from the University of Lancaster analysed billions of words of published works, including the entire Hansard record – the official record of proceedings in parliament – to assess the frequency and context of discussions of heart failure.

The study has been accepted after peer review and will be published in Open Heart.

Nick Hartshorne-Evans, CE and Founder of Pumping Marvellous will be available for interviews and further comment

Pumping Marvellous is the UK’s only heart failure charity

This research has been peer reviewed, and was accepted for publication in the BMJ journal Open Heart in April 2022

When compared to a different, non-medical issue of arguably lower importance (in terms of potential threat to human life expectancy and quality of life), potholes in UK roads and pavements, ‘heart failure’ is discussed much less.